Here at Manakin Dance, we obviously have an affinity for nature and it never fails to amaze us.

This week, in honor of our logo, we are going to be sharing the top five most outrageous courtship displays that birds around the world wing into action. Albatrosses are massive birds who spend most of their lives soaring the open seas for food and spending an insignificant portion of their lives on land.  So, when they come ashore to breed, they need to make a statement in order to secure a mate.

These Waved Albatrosses follow the standard for the for most albatrosses and tempt a prospective mate with a series of calls, beak taps and wing flaps.  This display which can go on for quite some time, predominately features what is almost an armwrestling competition as they tap their beaks together creating a symphony of sound, and a flash of gold.  Some head bobbing and wing flapping add to the scene as these majestic birds work to find their life-long mate. 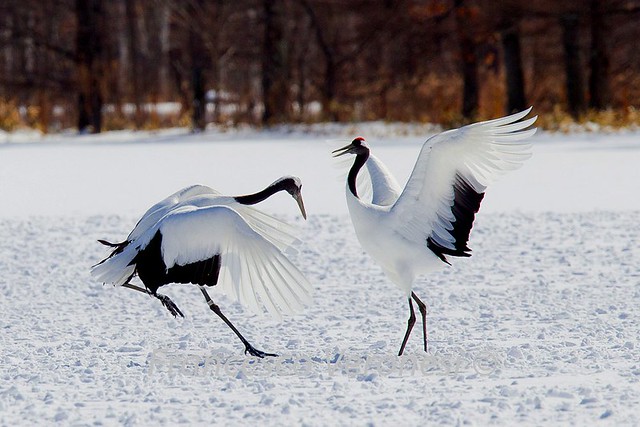 These red crowned cranes are nothing if not regal, but their courtship display can go anywhere from stately to a veritable boxing match.  These birds dance and bow and call to each other almost as two boxers circling one another in the ring.  It never comes to blows though, and their movements are as beautifully melded as two capoeira fighters in Brazil.

As the dance goes on, they become more aware of one another and in the end they chose their mate as the one with which they have the best chemistry.  After all, why do we dance in the first place?

This extraordinary bird is more of a shapeshifter than a dancer as it literally transforms its body to impress its very selective onlookers. In the beginning the superb bird of paradise looks like a small black bird, with nothing particularly unique about it.  That is until a female arrives.

Then the show begins and the plain bird shoots out its wings and reveals the bright blue fluorescent patch it was hiding.  The bird bounces around and is constantly adjusting its feathers to look like a circle or an oval or anything in between; all with that bright blue patch staring upwards at his prospective mate.  If she deems him worthy, his dancing can stop, but if not he will have to wait for another moment to show his true colors.

Well you knew it was coming, the Blue Manakin had to make an appearance.  These small birds use teamwork to get their female prospects attention, and that is why this is one of the most elaborate courtship dances of all.

These small birds line up and each buzz in front of a visiting female performing in perfect unison.  This amazing cooperation shows the amazing variety of the natural world and I think the GIF says more about the beauty of this display more than I ever could.

Not to be outdone, one bird takes the courtship display to a new level, by defying the laws of the natural world.

Clark's grebes pair up and after some head bobbing and preening, they take the bring out the grand finale.  All of a sudden the pair literally start walking on water. They stream across the surface of their pond announcing "yes, we're together" to the world.  This fantastical feat is certainly something to witness and is only goes to show what wonders we may have yet to see.

Nature is truly full of surprises and I hope seeing these amazing birds will help inspire you to take action every day with the planet in mind.